Axalta is not resposible for content you are about to view

Axalta released its 66th annual Global Automotive Color Popularity Report which shows white as the global leader in consumer vehicle colour choice in 2018. At an astounding 38 percent, white held its top spot with a significant gap ahead of second-place black (18%) and a third-place tie between silver and grey (12%).

"We have witnessed an emerging trend toward warmer shades along with colour combinations with black to challenge white's position," said Nancy Lockhart, Axalta Global Colour Marketing Manager. "Although neutral spaces are the headliners, there is an indication of a return to colour to change the automotive landscape. Blue is most popular outside the neutrals and holding strong at seven percent of the market, increases of orange and bronze are popping up and gaining interest."

Regional highlights from the 2018 report include:

According to Annie You, Axalta OEM Colour Designer – China, Axalta customers value the annual report and some of the understated trends it unveils. "In China, white may have peaked in 2017 at 62 percent," she said. "This year, it is 58 percent, still well above any other region."

Elke Dirks, Axalta OEM Colour Designer – Europe, Middle East, Africa, points out a regional preference for grey. "For the first time in the history of our reporting, grey ranks second in the region making it a major player in the neutrals space," she said.

Spies Hecker, one of the global refinish coating brands from Axalta, develops optimum and practical paint system solutions that can make bodyshop work easier and more efficient. With over 135 years of success behind it, Spies Hecker’s high-quality product systems, customised service and targeted training demonstrate its partnership with the refinish industry. The Cologne paint brand is one of the world’s leading vehicle refinish brands, and is available in over 76 countries worldwide. 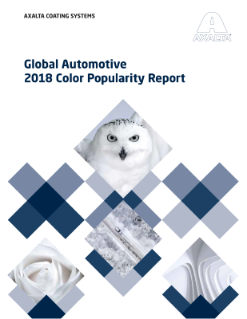